Sound is vibrations in the form of a wave, or a sound wave. Nearly everything we call “music” is heard as sound waves that vibrate through the air to reach our ears. Sound can travel through other media as well; whales communicate by sending and hearing their calls through the water, and elephants can sense sound waves transmitted in the soil using their feet. Although humans have evolved to perceive sound primarily as waves traveling through a gas (air), we can also hear through liquids (hearing noises underwater) and solids (hearing a train coming by putting our ear on the track).

This blog discusses the nature of sound, how instruments are able to create musical sounds, and why those sounds differ. Every instrument’s sound is unique. Sometimes the differences are drastic, and sometimes it is subtle. It takes a trained ear to hear the difference between a marching snare drum and a snare drum from a drumset. However, a flute and an organ are easily distinguishable. Why? Let’s explore how music is created as a result of differences in sound waves.

Sound waves can be measured in hertz (Hz), which represents the number of wave cycles per second, or frequency. Pitch is the musical term used to describe how low or high a sound is. The lower the hertz, the lower the pitch. The higher the hertz, the higher the pitch. Humans have a limited range of frequencies we can hear (about 20-20000 Hz). Many sounds exist that we cannot hear. For example, a dog whistle is too high pitched for a human to hear (23-54 kHz). A more extreme example of a pitch inaudible to humans is the lowest sound wave ever detected, which was a B-flat 57 octaves below middle C, emitted by a black hole. Anything that moves or vibrates generates waves that produce sound.

What makes instruments sound different from one another?

The size, material, and way that an instrument crates vibration are all factors that determine the resulting sound of an instrument. The picture above shows the wave forms created by different instruments; notice how each instrument’s sound waves create a unique vibration. This video provides a visual representation of the sound waves produced by instruments while they are being played.

Timbre and tone color are terms that are used to describe the specific quality, tone, or features of a sound. Human voices have unique timbres/tone colors; they can be raspy, mellow, warm, bright, etc. just like musical instruments. Furthermore, the onset (attack), duration (sustain), and fading (release) of a sound gives them all unique characteristics. All the factors mentioned above and described below contribute to each instrument’s distinctive tone color. Even if a piano, guitar, cello, marimba, and saxophone all play the same note, their timbre will differ due to their size, shape, material, and way they are played. Click here to watch a video of different instruments playing “Despacito,” and note the different types of sound produced from their differences in size, construction, and how they are played. 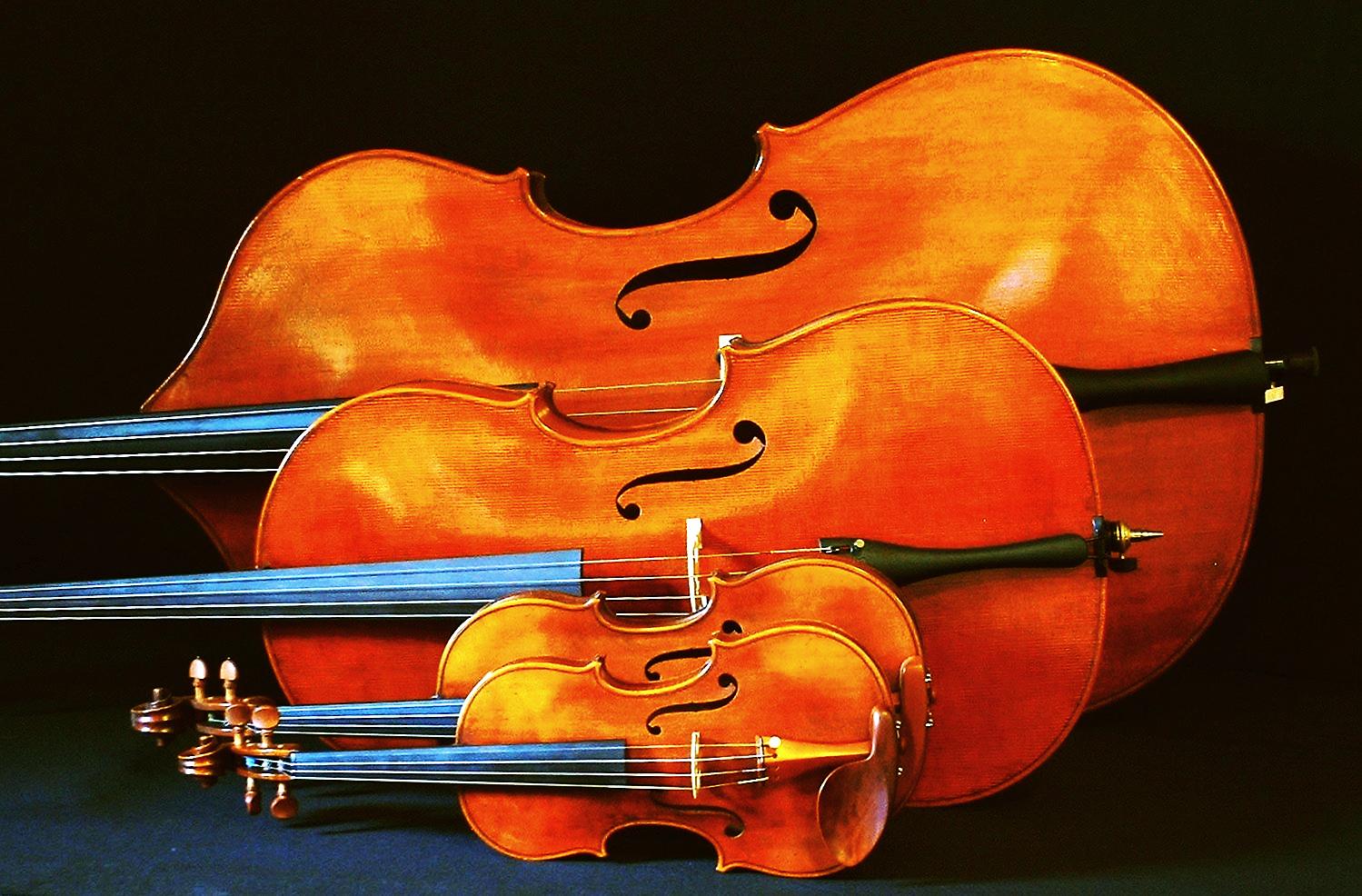 In general, the larger the object/instrument, the lower the pitch, and the smaller the object/instrument, the higher the pitch. Consider the difference between a violin, viola, cello, and double bass—their construction and shape are very similar, they produce sound by running a bow across strings, their timbres are comparable, but the pitches they produce are dependent on their size. An increase in thickness, length, or looseness lowers pitch; thinner, shorter, and tighter construction raise an instrument’s pitch. One way to explore these concepts is to stretch and pluck rubber bands of different sizes and thicknesses. Rubber bands that are thicker and denser will have a lower pitch than those that are thinner and less dense. When the rubber bands are stretched and made tighter, the frequency is increased and the pitch goes up; when they are loosened, the pitch goes down.

The material used to make an instrument also plays a crucial role in the resulting sound. Because the sound waves travel through the instrument before the air, the material changes the tone. Guitars with metal strings have a very different tone than those with nylon strings. Metal instruments tend to sound brighter, while wooden instruments are more mellow.

Here is an experiment that can be done at home by making your own musical instrument at home. Take some dry beans and put them in an empty aluminum can. Cover the opening used to put the beans in. Shake it. Congratulations! You just made a percussion instrument called a shaker. Make another shaker using the same amount of beans, except this time use a glass container that is roughly the same size and shape. They will sound completely different! Try using other materials (wood, ceramic, etc.) to notice how the tone color changes because of the material used. Click here for a fun activity to do with younger children that lets them experience how different materials produce different sounds.

How are instruments played?

How an instrument is played greatly affects its resulting sound, possibly more so than any other variable. Some instruments are struck, some are strummed, some push air through chambers, and some create sounds by electronic means. As a result, the tonal qualities of each instrument are unique, and the resulting sounds are different. Many means of instrument classification categorize instruments based on the way they create vibrations. Acoustic instruments create vibrations directly from their bodies, while electric and digital instruments need the proper amplification and some sort of speaker/headphones to produce the sound waves that are intended for listening. When electricity is a factor, electrical components, the means by which the signal travels, and the stops the signal makes on the way from player to final sound all alter the sound that are ultimately heard by human ears.

The mixture of multiple factors combines to make instruments sound differently from one another. Knowledge of how and why sound waves are formed in the manner they are allows for more clarity and understanding of music in general.