It’s been a while since I’ve written a blog, so I decided to jump back in with a very personal blog about the relationship between music and my mental health. In this blog, I’ll discuss how music has affected and been affected by my mental illnesses, from my past to my present. At the end, I encourage the readers to ask themselves some questions that may shed some light about what role(s) music might play in their lives.

I have been clinically diagnosed with two mental disorders. I don’t mention them specifically—not because I am ashamed, but because I hope that by not doing so, more people can relate to my story. I’ll begin with where we are now as a society, and proceed by detailing my own personal account. If you read this and wish to reach out to me, I would love that. Feel free to email me at victor@metromusicmakers.com.

Where We Are Now

Before I tell my story, let’s take a quick glimpse at the current state of mental illnesses. Our contemporary world and present situation have revealed the importance of mental health, maybe more than ever. Covid, politics, natural and manmade disasters, cultural tensions, and the usual problems (poverty, war, etc.) have all exacerbated people’s mental struggles.

According to the NIH, nearly one in five adults in the United States (51.5 million people) are living with mental illness. That data was collected in 2019, so it is worth mentioning that a lot has happened since then (to say the least), and that number does not include children. Fortunately, mental health awareness has been brought to the forefront through social media, news outlets, celebrities, and chances are, by people you know.

Thankfully, there are countless resources for those suffering from mental illness. In the United States, some good starting points are The National Institute of Mental Health, https://www.mentalhealth.gov, the CDC, and the National Alliance on Mental Illness. Those are just a few of the major institutions and organizations that provide information, support, and guidance for dealing with mental illness (therapy, treatment, activities, support groups, etc.). If you are interested specifically in music therapy, check out The American Music Therapy Association or  contact Metro Music Makers for more information.

I told the story of my musical journey in another blog, so I’ll leave most of that out. From a very early age, I felt different. I felt out of place. Almost as if there was something missing—a void in my soul. Despite the fact that I had a loving family, friends, wanted for nothing, and nothing really to complain about, I didn’t feel right. I spent a lot of time in my head. There was a deep longing within me.

I connected with music because of its expressivity: music had the power to make me feel incredibly happy, and it also allowed me to relate to the deep longing and yearning I heard in sound. Sly and the Family Stone could make me move, or Mozart could help me sleep. Wu-Tang Clan could be in my face or Sade could be smooth. Music made me feel human. I didn’t look at artists such as Kurt Cobain, Frederic Chopin, Jimi Hendrix, Muddy Waters, and Otis Redding just as musicians who were “out there” somewhere. I felt a profound relationship with them.

As an imaginative only child, the mental and emotional bonds I made with music were very strong. I started playing guitar, writing poetry and music, and playing in bands. Music was a fantastic outlet for me to express myself, socialize, acquire skills, and relate to life in general. I felt like music could truly do anything. The lessons that I learned through sound I would apply to my own life.

But as I grew older, that void in my soul was still there and things still felt “off.” Throughout adolescence and early adulthood, the symptoms of my mental illnesses persisted and worsened. As it turned out, music would be a double-edged sword at times. While it did nurture my creativity and artistic nature, I also (unknowingly) used music and the arts to validate and rationalize unhealthy thoughts and behaviors. 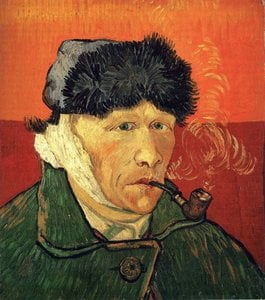 The romanticized idea of a “tortured artist” was one that I latched on to. Van Gogh, Ernest Hemmingway, Beethoven, Nietzsche, Kurt Cobain, Robin Williams, Amy Winehouse, Michelangelo, Keith Richards, Edgar Allan Poe… the list goes on. They all seemed to have a certain mysticism. Because I looked up to these people, I thought their successes excused and even added value to their struggles. Not only did I find it intriguing, I used the myth of the tortured artist to justify my own suffering. I would think, “Well, George Orwell did this and succeeded, so I can too,” or “I’m living like Basquiat—how cool!”

These ideas are not to imply I was naïve or delusional enough to believe I was some sort of super-genius, but by glorifying those figures, I encouraged my disorders and neglected my own well-being. The notion of the tortured artist gave me the illusion that my mental illnesses somehow made me more creative or inspired me. They didn’t. There is a stark difference between creating like Basquiat and living like Basquiat. Living like him wasn’t cool. I was sick.

I often listened to music to aggravate or intensify my emotions. Certain types of music would trigger negative thoughts or behaviors. My writing and playing became completely dependent upon my mental state, instead of my values and ambitions. Music became a means to an end—financial, professional, or egotistical. I no longer loved music for its own sake; I used it because it allowed me to live a certain way. It was the soundtrack to the rollercoaster that was my life. Looking back, I considered my mental illnesses as creative “fuel” that I could burn to make music and art. There were times when I had extreme emotions, mood swings, spiraling thoughts, and fluctuations in energy. I was burning the fuel, but going nowhere. What I conceived as a blessing and a curse was just a curse.

There were times when I would go days without playing guitar or listening to music. My guitars gathering dust and blank notebook pages were indicators that I was neglecting things I once loved. Self-care began to slip. Things got bad.

The passionate flights of fancy I once took into my imagination turned into me living in a metaphorical broken-down car in the abyss inside my head. Before I had been able to reconcile reality and fantasy, but it slowly turned into dark fantasies that rendered me unable to function on a practical level, as well as a creative level. Something had to give.

I finally hit “rock bottom” when I realized that that hole in my soul was now just an empty hole and nothing else. I was spiritually bankrupt. When the pain of living became greater than the discomfort it would take to change, I finally reached out for help.

This picture was taken while I was playing at a treatment center that I was in. I formed a group there by encouraging other patients to perform weekly shows. A patient had rewritten the lyrics to “Happy” by the Rolling Stones, and I was playing slide. The blurry nature of the photo is an accurate representation of my life at the time—shaky, a bit confused, but overall, glad to be getting my life back on track and making music again.

Where I’ve Ended Up

“Help” came in many forms: professional treatment, therapy, exercise, meditation, spirituality, support groups, self-care, healthy habits, and love. Lots of love. The hardest part of all that has been learning to love myself, but it’s coming along.

As my journey of recovery progresses, I am unearthing many things. My original passion for music and art came back. When that childlike wonder returned, it was almost as if I was discovering songwriting, listening, teaching music, and playing guitar for the first time. I was finding new meaning, recontextualizing my old ways of thinking and behaving, and exploring sound again. It was truly exciting.

Out of concerns of becoming “numb” or losing my creative edge, I had some stigmas and apprehension about a lifestyle of recovery and taking medications. In my mind, I was a unique human being that painted his own life the way I pleased. I now have a few thoughts about that.

First, I am distinctive, but not terminally unique. Plenty of other people have faced similar struggles as me. Second, I knew very little about successfully managing my life with respect to my illnesses. The “painting” I created of my life was a mess. Getting help allowed me to put things in perspective and hear others’ opinions about how to live happily as a artist. Third, my psychiatrist assured me that the right meds shouldn’t make me numb and should just make me, as she said, “more Victoresque.”. She was right. Finally, I am able to be creative and artistic, but without the extreme highs and lows that were characteristic of my illnesses. My creativity is there and more focused, less erratic, and a lot less harmful to my health.

As far as the “tortured artist” narrative is concerned, I let that go. Film, books, and media perpetuate the misconception that mental illness enhances creativity. Yes, the renowned artists I mentioned above are celebrated, but many of them were miserable. Their lives were living nightmares, as was mine. Not only would they have still produced their beautiful work if they had sought help, they would also have led much happier lives—and some of them might still be alive. Judith Schlesinger’s 2012 book “The Insanity Hoax” does an excellent job debunking the “myth of the mad genius” through her broad, extensive research. Her book helped me abandon that fallacy.

Like any lifelong, passionate, and loving relationship, my relationship with music is complicated. My life is by no means perfect, and I still have trials and tribulations. I’ve had to reimagine and rework the way that I interact with music, my mental illnesses, and the rest of the world.

It’s been a few years now since I decided to become proactive in recovering from mental illness. I am so grateful, blessed, and happy that I finally asked for help. I’m lucky I did.

Music has been, and will always be, one of the most important aspects of my life. It’s such a powerful thing, and although I abused it and misused it, I’m learning to appreciate the way I think it deserves to be appreciated.

Hopefully, my story has inspired readers to look at their own relationships with music more deeply. Take a few minutes to answer the following questions about the role of music in your own life—you might surprise yourself!