I’m writing this more personal blog just to share my experience as a musician. I’ve always enjoyed reading about the lives of my favorite musicians—how they got started, following the twists and turns in their paths, and ultimately seeing them realize their goals. My story isn’t as raucous as Keith Richards’, didn’t unfold as dramatically as Ray Charles’, and didn’t begin as early as Mozart’s. However, sometimes I need a reminder of how far I’ve come as a musician and how I got to where I am today. This blog is an abridged version of my musical journey. 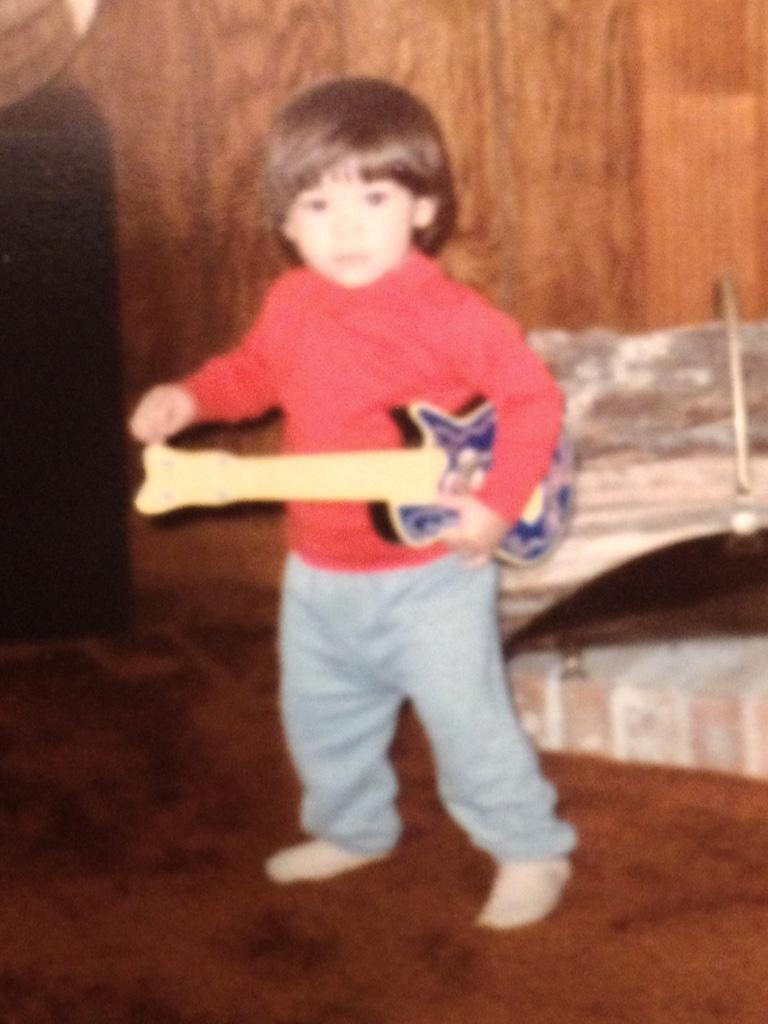 From an early age, I can vividly remember listening to music with my parents, dancing with them, singing, and feeling that music is a special part of life. Certain songs, albums, and artists take me back to very specific moments in my childhood when I hear them. Synchronicity by the Police puts me in the passenger seat of my mom’s car driving to some errand I got dragged into. When I hear “Take on Me” by a-ha, I think of my dad trying (and failing) to hit that high note. Outkast’s “ATLiens” reminds me of bouncing with my friends on the school bus. Every minute of Nirvana’s Nevermind transports me to the carpeted floor in my room, listening with intrigue and intent to all that beautiful noise. Music was, and is, powerful for me—a true life-changing force. Little did I know how much that force would shape my life.

One day I found my dad’s old classical guitar in my basement. That was when I decided to play an instrument. Since then, I’ve played guitar. The first album I ever bought for myself was Are You Experienced? by The Jimi Hendrix Experience, and I desperately wanted to make a guitar sing like that. Needless to say, it took a while to even come close. The classical guitar wasn’t very rock and roll, and it turns out that playing guitar was difficult. It took patience, determination, and practice. Lots of practice.

I started taking private guitar lessons at age 10. I would come in with a CD or some example of music that I liked, and my guitar teacher would simply listen, figure out the song, and write a tab out for me. I was totally blown away with the effortless ease he could hear and play music. I learned basic open chords and some easy melodies.

It began with awkward finger movements, painful fingertips, chunky strumming, and unintentionally syncopated rhythms. Eventually, I kind of got the hang of it. There was definitely waxing and waning of practice time, loss of interest, and times when my guitar got dusty just sitting on a stand. Despite the difficulties, I continued playing, began writing songs, singing and playing, and taking it more seriously as an artistic endeavor. Eventually, I got to a place where I was happy with my playing, and other people could honestly say I was making tolerable music. That took years for me. 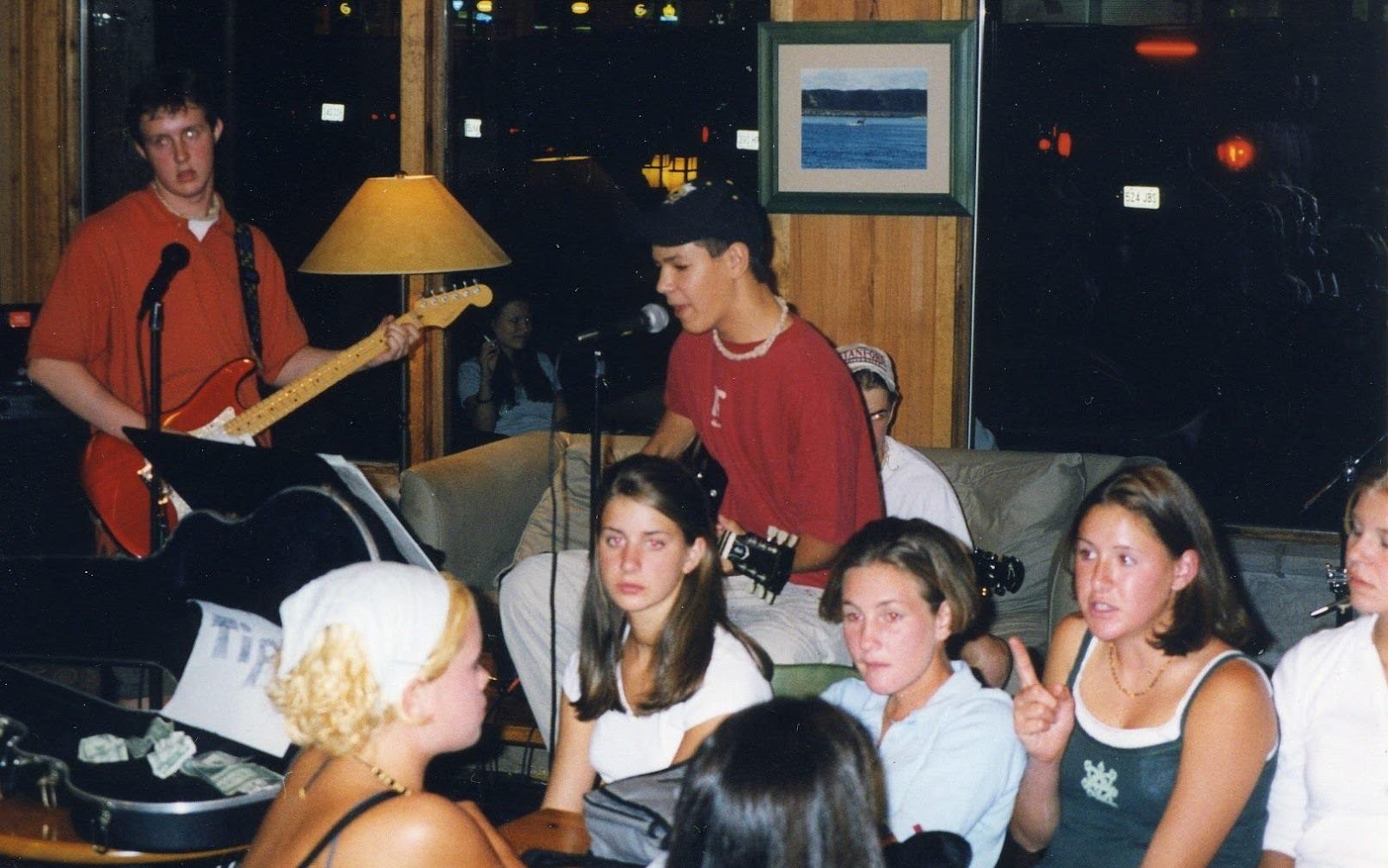 In high school, some friends and I started my first real band (I had started other “bands” before, but I think you have to actually play music together to be a band). We rehearsed in at the drummer’s basement, learned some songs, and even played some gigs at coffee shops, birthday parties, and record stores. It was very cool. Up until then, I had always been content just playing my guitar alone in my room. Making music with others was completely different and much more thrilling. The social aspects of planning, rehearsing, jamming, and performing revealed a whole new dynamic and multifaceted aspect to music-making.

My musicianship was expanding; I was beginning to love and appreciate all the ways in which music could bring joy. I ended up taking lessons throughout high school, and I can remember feeling quite accomplished when my guitar teacher would compliment me on my playing. By the end of high school, I could play some pretty neat licks and was (for the most part) successfully mimicking players I had always idolized. At some point, I decided that I would continue improving my musicianship in college. I planned to double-major in music and marine biology. 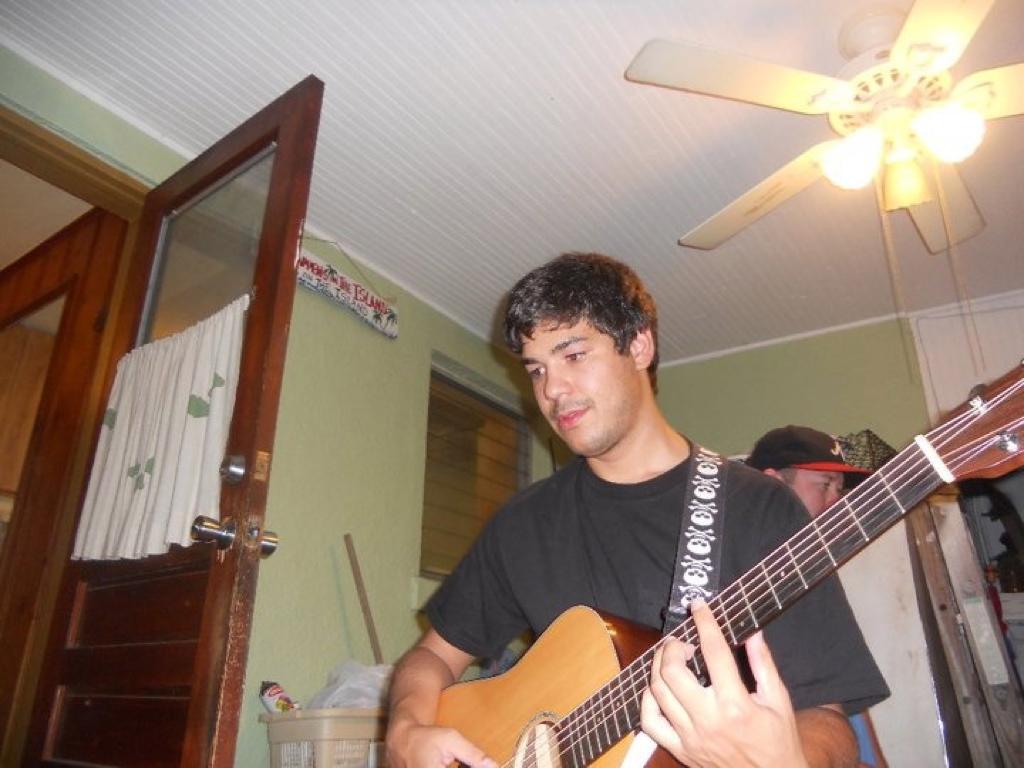 My quest for a double-major didn’t last very long once I got to Florida State University—for the first year, my concern was definitely not academics. You could probably say that for a while my major was partying, which I definitely exceled in. I didn’t really get into a rhythm with my schoolwork until my third year, when I finally settled on a major. I decided to major in Interdisciplinary Humanities, which allowed me to explore and find connections amongst the arts while focusing on one art form specifically. I chose Music Studies as my area of focus. I did begin to enjoy classes, and eventually struck a balance between academic fun and extracurricular fun. While I learned more about philosophical, cultural, political, and artistic aspects of music, I continued playing guitar on my own.

During this time, I didn’t really gig. Every now and then I would play along with other musicians, but I mainly made music alone. This allowed me to focus on songwriting, do some independent research on guitar tone, learn about how guitar rigs work, play with recording software, and write a lot of songs. I definitely played a lot. There was always a guitar lying around, and it would usually be in my hands. Even when I was just hanging out with friends, I would be playing. I would take requests and learn songs to play back for other people. While expanding my repertoire, I started getting pretty good at learning music by ear.

After earning my B.A., I didn’t really know what to do, but I did know that I loved the arts. I had never really wanted to be a performer. Playing guitar at home and writing songs that no one would ever hear made me happy. I really just wanted to learn more. So, I went back to school. 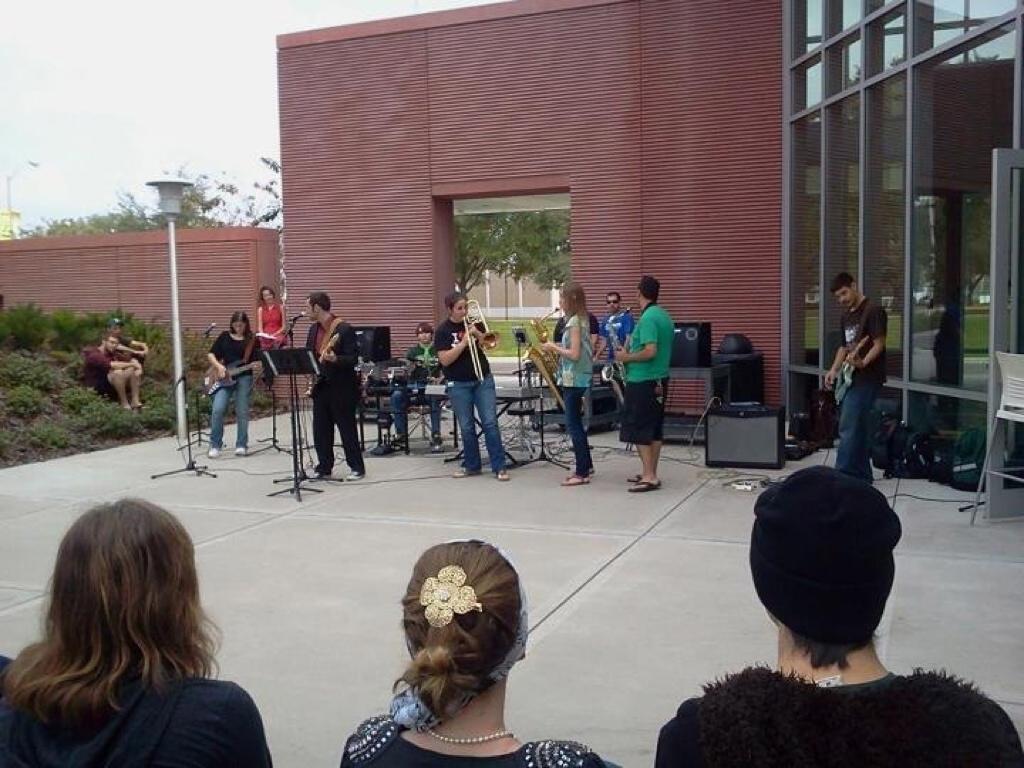 While getting my M.A., I improved on all of my existing musical endeavors: playing guitar, improvising, songwriting, digital and electronic musical tools, music history, and music culture. I ended up getting my Master’s in Interdisciplinary Humanities, except this time my concentration was philosophy. I loved all the arts, and philosophy was an area that could unite them all. Despite straying away from music in academia, it was still the major force in my life outside of class. I began teaching classes, and after graduation ended up as a professor of philosophy at Kennesaw State University north of Atlanta. It wasn’t long before I wanted to continue learning more…

I decided to apply to a doctoral program in music. I didn’t expect to get in, because I had basically no background in traditional, institutional music (band, choir, and orchestra). My musicianship was cultivated in bedrooms, garages, and basements instead of classrooms, conservatories, and staff paper. To my surprise, I was accepted.

During my doctoral work, I jammed a lot with various groups, taught several courses, and scheduled concerts for my classes (that’s me playing with one of my classes in the picture above)—and I had a lot of fun along the way. I was even in an iPad band that played to a couple of sizable crowds. My musicianship was refined, and my teaching vastly improved. From an academic standpoint, I investigated research, became familiar with theories and practices in music education, and eventually wrote a dissertation. Feel free to read my dissertation here. Finally, I graduated with a terminal degree, meaning I could take my studies no further in that field (although I’ve always wanted to go back to school). It was time to work. 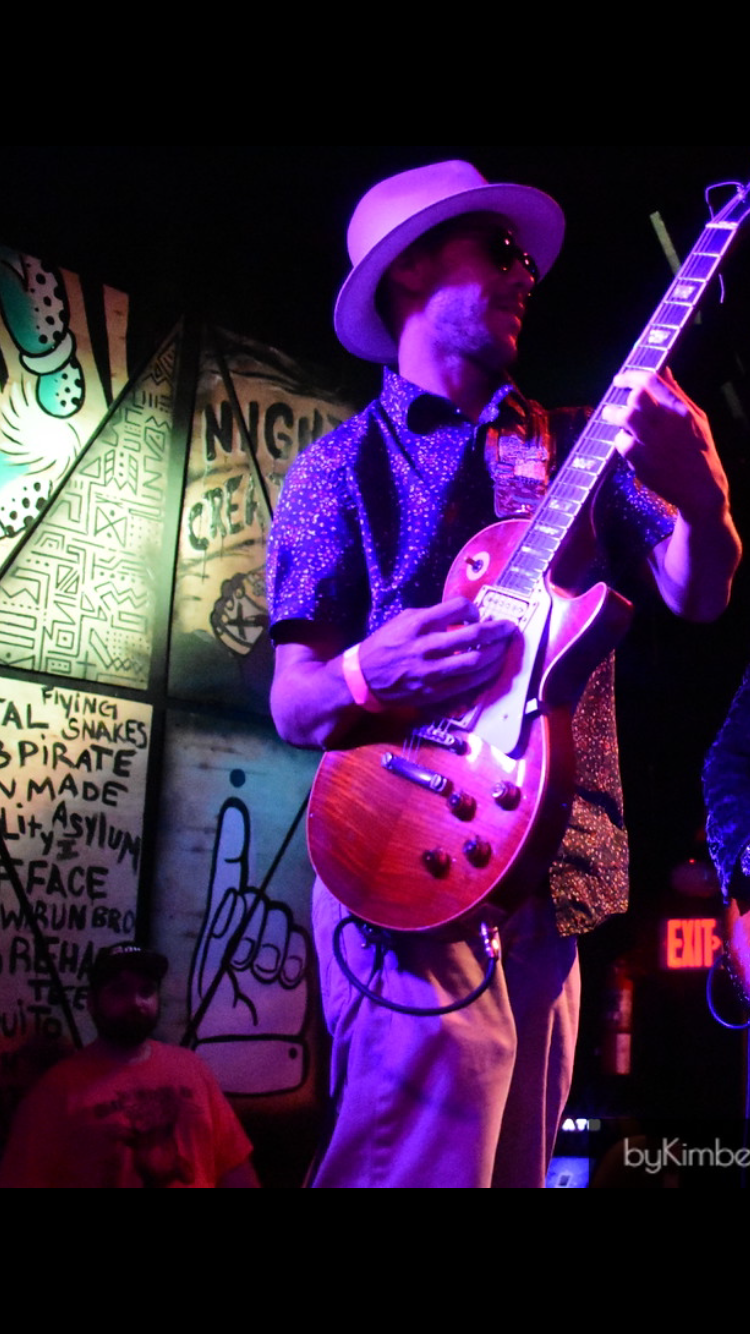 My first job was teaching music at the elementary level, which was not for me, but I did learn a great deal about classroom management and childhood music-making. Then, I taught a middle school class that was basically music production and marketing. I enjoyed that, but the funding was cut. After that, I went back to teaching at the college level for several years until I joined Metro Music Makers. The entire time, I’ve continued to perform with bands, write songs, teach, record, and, of course, play guitar in my bedroom.

Today, I’ll often hear people tell me, “Man, you’re talented” or, “I wish I could play guitar like that, but I’m just not musical.” I used to give a proper academic music education response. But now, more often than not, I just chuckle. I think back about how long it took to get where I am—how much practice and effort I put forth, how many wrong notes I played (and still do!), how many disinterested audiences I’ve played in front of, how my slide guitar playing sounded like cats being tortured, how I could definitely tell people were just being nice when they would say, “Oh, that sounds good” (because it didn’t). I also think about how it paid off. After 27 years of making music, it has become the most influential thing in my life. I can’t imagine not playing guitar, and I don’t want to.

As a teacher I feel extremely conscientious, humbled, excited, and lucky to help others make music. I reflect on how long it took me to be comfortable with my playing, and recognize that doesn’t have to be the case. I make the most of my experiences and resources to spread the love of music to as many people as possible. Music is still as mystifying and magical as it was when I was a child, and now I get to help other people recognize that for themselves. I love it.