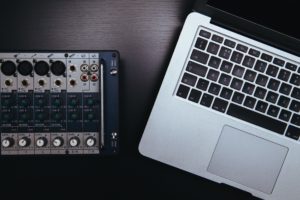 In 1999, I recorded my first album with my high school band. I recorded several more over the next decade. The process was always the same: rent out a recording studio, spend a few weeks laying down tracks, another week or so for mixing and mastering, send the masters to the CD duplicator, and months later, sell the CDs after shows. Hundreds, if not thousands, of dollars and hours were spent — and not one of those albums is currently for sale anywhere (though I do still have a few boxes of old CDs somewhere around the house).

Then the music industry changed. Today, every aspect of the recording process and the way we buy and listen to music has been streamlined and made more affordable. From the advent of the home studio to the lack of a physical product, making music and distributing it to the world has never been easier.

So how do you go from writing a song to selling it on iTunes? First, you need to record it. The big budget recording studios still exist, and big-name acts still use them. But for the indie artist, a home studio is the best option. Software like Logic, ProTools, Abelton, Cubase, and many others start around $200. But if you own a Mac, there is a program called GarageBand that is free and is capable of fully-produced tracks. An audio interface, which allows you to plug a mic, guitar, keyboard or any other instrument into the computer, can run about $100. Learning how to use your equipment and software takes time and dedication, just like your instrument. Several instructors at Metro Music Makers are well-versed in home recording, so don’t be afraid to contact us to see what services we provide that work best for you.

Now that you have a finished product, the next step is distribution. You can’t just email Apple and ask them to sell your new album on iTunes. Instead, there are companies that, for a fee, publish your songs. When your song sells on iTunes, they collect the money from the sale, take a cut, and then pay you. Some companies to consider are Tunecore, Distrokid, and the most popular, CDBaby.

Next, you’ll want to sign up for digital distribution on the streaming platforms like Spotify, GooglePlay, Pandora, Apple Music, and the hundreds of other sites around the world. The companies mentioned above will do this for you and collect the royalties from streams. Every time someone listens to your song online, you get paid.

At some point during this process, you will want to file a copyright on the songs you’ve written. A copyright protects you if another songwriter were to take your original idea for their music. Some people file before their release. Some wait until they’ve done a few releases and then bundle them together. It’s an easy process with an online form at copyright.gov and a small fee.

In the last three years, I have recorded two albums (the third comes out early 2018), three singles, and done session work on several other albums, all of which are available on every digital site the music world has to offer. I can see stats that show my music is being played everywhere from South America to Sweden and everywhere in between. My music is online permanently. They’ll be streamed and downloaded forever. . . unlike those boxes of CDs I have collecting dust in the basement.