Jazz is a genre of music that developed alongside the blues in the late 19th century. There are many sub-genres of jazz, including bebop, fusion, smooth jazz, Latin jazz, free jazz, and many others—all with a heavy emphasis on improvisation.

The guitar, while not a traditional jazz instrument, has played a large part in the popularity of jazz. Some of the most talented guitarists in the world can be found in the jazz genre because of the techniques, creativity and knowledge needed. Jazz guitarists should be well-rounded and challenge themselves to learn as many styles as they can. The benefits of learning jazz guitar will translate over to all other styles of playing. 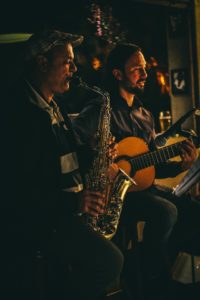 For example, one technique jazz guitarists use more than a rock/metal guitarist is the plucking of the strings with the fingers, instead of strumming with a pick. Jazz guitarists may use picks at times, and they also might strum different tunes (sometimes with just the thumb instead of a pick)—but more often, they use their fingers to pluck for rhythmic passages.

In a basic rock song, you might play a G chord. But in a jazz tune, you might play G7#5. The typical voicing for G7#5 doesn’t use all the strings, so placing the right-hand fingers (for right-handed guitarists) on the appropriate strings and plucking is the best way to play it. Plus, you can achieve some really cool rhythms by plucking.

If you don’t know how to play that chord, or what the 7 and #5 mean, don’t worry. That’s just another reason to learn jazz guitar—or more importantly, jazz theory. Accomplished jazz players have an enormous amount of knowledge of chordal harmony at their fingertips.

Start by asking your teacher to help you learn some of the more complicated chords. What’s the difference between Gmaj7 and G7? What is a diminished chord? Wait—Am11? You’re just making up chords now!

You should be, because now we get to the selling point: solos upon solos upon solos! Traditional jazz usually follows the same form. It starts with the head (the main chord progression with a melody line), then everyone gets a solo. Everyone! Yes, even the drummer. You then return to the head and finish the song. When your solo comes up, it’s your turn to shine. You can play your best lines using scales, chord tones, chromatic notes, notes that are in the key, even notes that are out of the key. Jazz gives us a lot of options, and while some players sound like they’re hitting random notes, the best players are using an extensive knowledge of theory and harmony to express their ideas.

If you’re a rock guitarist, you’ve probably learned the pentatonic scale. As a jazz guitarist, you’ll learn to expand on that scale and many others to make up a solo on the spot. No jazz musician plays a song the same way twice.

Finally, becoming an accomplished jazz guitarist will give you an excuse to indulge in one of my favorite pastimes: buying a new guitar! While jazz guitar has evolved into new territory over the years, and musicians play Stratocasters, Telecasters, Les Pauls and many others, the traditional jazz guitar is a hollow-body electric guitar, such as the Gibson Byrdland, L-5 or ES175.

You can also check out the techniques and guitars used in these examples. Enjoy!