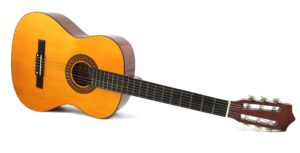 The guitar is one of the most popular instruments – and for good reason! Whether you like rock, country, blues, jazz or hip-hop, you listen to guitar music every day. But most young players have no idea that plucked-string instruments have been around for thousands of years, and there is a vast repertoire of music specifically written for the early guitar, now known as the classical guitar.

Classical guitar music, unlike most compositions during the Renaissance, Baroque and Romantic periods, was written specifically for the instrument by guitarists themselves. Mozart might compose for the piano one day and then a full symphony the next day. But a composer like Matteo Carcassi wrote specifically for the guitar because that was his instrument. In the last few centuries, many composers have arranged pieces for the guitar that originally were written for other instruments. For example, some of the most popular classical guitar pieces are arrangements originally written for the cello by Bach.

The techniques used to play guitar are some of the most difficult in the musical world. Classical guitar is, in many ways, even more challenging than modern rock guitar. For example, the pick is not used – fingers and nails are used to pluck the strings instead. Classical guitarists sit with their right leg on a footstool and straddle the guitar body on their left leg (for right-handed players). The guitar itself is very different with a wider neck and fatter strings made of nylon. Everything about learning this style can feel awkward at first if you are used to playing Hendrix on a Stratocaster while standing up. The dexterity, accuracy and discipline needed to play classical music on the guitar will make you a better musician and translates to all other styles.

Would it surprise you to hear that some of your favorite rock guitarists started on classical? If you have ever heard “Crazy Train,” then you have heard the late Randy Rhodes. His composition and improvisational style directly reflects his upbringing in classical guitar. Steve Howe of Yes is another world-renowned guitarist who uses his classical background in his playing style. So many metal and prog-rock guitarists come from this tradition.

Want to learn classical guitar? Ask your instructor for help! A great place to start is the book Solo Guitar Playing by Frederick Noad. There are thousands of incredible pieces you can learn and plenty of videos on the internet to explore from the vast repertoire. There are even compositions written today for the modern classical guitarist.