I have often been asked about how to choose a first instrument for a child who wants to play music. Most of the time, the first questions are about price, size, style or even color. But a choice that usually gets left until last is, in my opinion, one of the most important in our modern age of music: electric or acoustic? Whether guitar, piano or drums, music students are left to choose between two paths – two roads that diverge into worlds that, while related, have many qualities uniquely their own. Some would say, and rightly so, that each has its own merits and should be considered separately. But for the starting musician of limited means, a choice must be made on what will be their main instrument for at least the immediately foreseeable future. So with all due deference towards both modes of sound production, I propose that between these two families of musical instruments, one emerges as more suited to beginning students: acoustic. 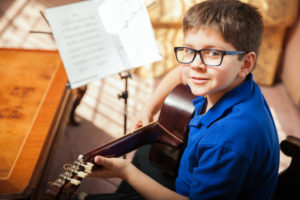 The mystique of electric instruments is often also their downfall for early students. Children are at once presented with the keys to an arsenal of sounds for which they have no preparation, like an aspiring but untrained artist presented with every possible color. Could great works be created from this palate? Could music of untold beauty be painted for us with this rainbow of sounds? In theory, yes. But in practice, this is easier said than done. Most beginner equipment only vaguely approximates the sound that more expensive equipment is designed to produce; many times the quality of sound produced by beginners is hopelessly colored by the quality of their setup. And even the best amplifiers and effects pedals that money can buy will only serve to unsuccessfully disguise poor tone and technique that would otherwise be glaringly apparent in a beginner’s playing. Switching between a dozen different instruments on an electric keyboard does not improve what is lacking in the playing of a piece, but, rather, only acts as an easily accessible distraction from the quality of the music. Covering up the most basic sound of an instrument, either purposefully with electronic effects or unintentionally with poor equipment, can be a barrier to a student truly connecting with the sound they are actually producing.

Dynamics, the ability to produce a range of volumes from loud to soft, are understandably important to music in general. But in the electric world, the relationship between playing and dynamics is obscured. Whether it is a piano student who turns down their keyboard when I ask them to play more softly, or the guitar player who turns their amp’s volume up higher to mask the fact that they aren’t making enough contact with the strings to get clear, even notes, these students are missing out on an experience fundamental to producing impactful music. In the world of advanced electric players, experts know how to employ their own touch to give weight to their playing, even while also utilizing modern, electric means to alter their volume. Starting a student with an electric instrument can be taking away their opportunity to truly understand their own dynamic potential, leading them to seek out dynamic variation only through artificial means.

Even when a student is exposed to dynamic playing on an electric instrument from the very start, often keyboard keys are not sensitive enough to produce the range of sound desired or unwanted qualities of sound arise when strings are played outside a certain range of volume. Acoustic instruments, on their other hand, are made to accentuate their dynamic qualities. Also, experience with sound production in the acoustic family is easily transferable to the electric family with great success, while the opposite is often not as easily accomplished. The reason for this the transferability is in large part due to the fact that the production of dynamics on an acoustic instrument serves to build strength and technique that is focused on good tone and control of volume, rather than simply putting fingers in the correct location or playing the correct rhythm. This means a student will adjust for what they hear coming out of their instrument rather than searching for a solution outside their own playing. This inevitably leads to a player who will grow to sound great on any instrument they pick up. And for those who suggest that electric guitar strings or electric keyboard keys offer greater ease in playability with very little weight need to press them down, I offer two rebuttals: 1) The strength needed to play well is developed through string tension and the strength required to depress keys, and 2) Many varying thicknesses and styles of acoustic guitar strings (including nylon for classical guitar fans) and acoustic pianos of all playability levels are available to those who feel that physical dexterity may present a challenge.

Then we come to the realm of a personal understanding: the idea that a student should, on some fundamental level, grasp what is going on inside their instrument to produce sound so that the principles that govern their instrument might better inform their playing. Explaining electromagnetic induction to a child (or even an adult with a bachelor’s degree) is likely to elicit blank stares and frustration, and this is only enough to explain the basics of how a pickup (the small devices below electric guitar strings that register sound) works. Between the inputs and outputs, chords and jacks, and knobs and buttons galore, the seemingly endless array of technical apparatus on electric instruments seem to demand a schematic and a PH.D in electrical engineering. The explanation of an acoustic instrument is more readily visible and comprehensible. If I want to explain how an acoustic piano works, I open up the lid and have a child look inside. If I want to show a student how an acoustic guitar works, I show them where the strings connect to the body and can have them feel the vibration of the top of the guitar as I strum a chord. Showing a student that a vibrating string is the source of their sound lets them truly take ownership of how they deal with producing sound on that string, rather than pushing that responsibility off on good speakers or an effects pedal.

And last we come to the more practical concern of cost. Though it should be pointed out that extremely cheap electric and acoustic instruments both sound equally abysmal, it is my opinion that on the upper end of entry level ($200 or above), an acoustic guitar purchase yields a more quality instrument. A good reason for this is often that an electric guitar pack for beginners often has to include an amplifier, chords, straps and other accessories that may not be included with an acoustic guitar that is sold “a la carte.” A basic, bottom of the line solid-top dreadnought style acoustic (the most iconic and recognizable of all guitar body styles) will outshine a starter pack electric guitar (of questionable setup and wiring) every time. And even an electric guitar purchased outside of a package deal requires that the owner also purchase the corresponding pieces (each sold separately). And while electric-acoustic guitars are often an option, at a lower price point, you are often sacrificing the quality of both the electric and acoustic sound of the instrument by refusing to commit to one or the other. In addition to problems with electronics, alterations made to the body styles of acoustic guitars (i.e. cutaways) that are designed to allow for playing higher up the neck often leave students stuck trading the volume and presence of their guitar for poorly tuned high notes and a muffled and quiet low end.

Even in the world of pianos, where a new electric keyboard can be $200, and a cheap new upright acoustic piano can be ten times that price, I still believe the acoustic piano shines. Unlike a guitar where an affordable instrument is often easily purchased new, an acoustic piano is a thing best bought with a few thousand miles on the odometer. Affordable acoustic pianos are listed for sale constantly, due to people downsizing or relocating, and many times they are simply given away (or sold for a pittance) to a good home for the price of having them moved by professionals. These instruments are often known to outlive their owners with few problems if well cared for. And besides tuning them when they are first moved to a home, they are often able to go years without being tuned if they are protected from the elements. Beyond their longevity, the sound of a real string vibrating in an acoustic piano is not likely to fall out of fashion, whereas my 18-year-old keyboard that I learned on as a child sounds much more artificial, muddy and lifeless than I remember it sounding when my mother first purchased it for me to learn on.

To be clear, any instrument purchased for a beginner is a great instrument. Whether a pawn shop electric guitar, an attic-find acoustic covered in dust, an electric keyboard that Devo could have played in concert, or a great grandmother’s heirloom piano, they all can bring joy and have their own unique merits. But when a parent asks me how they can best spend their hard earned money on their child’s first instrument, I feel confident in telling them an acoustic instrument is the best starting place.